About the Beloit International Film Festival

BIFF, building a community of independent filmmakers exhibiting their creative expression with audiences who appreciate the art form. All this in the remerging, lively and welcoming traditional downtown of Beloit Wisconsin.

BIFF is a ten-day tribute to the power of film and the excitement of independent film from around the world.  Local residents and visitors from across the nation fill venues, ranging in size from 40 to 400 seats for more than 100 films, and to meet scores of filmmakers who come from throughout the U.S. and as far away as Europe, Asia and Latin America.

BIFF celebrates filmmakers in all genres—features, documentaries, shorts— who enjoy the Beloit setting as much as the attendees do. BIFF promises crowds of interested viewers filling venues, questioning them at the films, and stopping them on the street to talk about their shared passions and projects in independent filmmaking.

Bringing the World to Beloit & Beloit to the World

From the Board President and Executive Director While this year’s festival may look and feel different, we have curated over 100 films to be enjoyed virtually in the comfort of our homes, 6 Special Presentation films at the BIFF Drive-In (pg. ??), and dozens of virtual Q+A sessions with our 2021 filmmakers, as well as a collection of virtual events designed to tickle the brains of both film-goers and filmmakers alike.

To celebrate SIXTEEN years (What? It still feels like yesterday…) of the Beloit International Film Festival, we’re especially excited to screen John Hughes’ Sixteen Candles, presented by First National Bank & Trust at the BIFF Drive-In Theater (pg. ??). Join Molly Ringwald and Anthony Michael Hall on the big screen as they make their way through those hilarious rites of passage that we all remember, and love to relive.

In addition to our wide selection of independent films to view through our virtual platform, we also welcome Rachel Portman to our festival, the composer of such films as Benny & Joon (pg. ??), Chocolat, Mona Lisa Smile, and quite literally dozens more stand-out pieces of cinema. Rachel Portman will engage in an in-depth discussion (pg. ??) about her career and her craft before speaking with two Beloit natives Jonathan Bartz and Pierre Charles who have begun promising careers in Hollywood as composers. This is a conversation you will not want to miss.

We have also launched a fundraising campaign to last the 10 days of BIFF. BUILD UP BIFF calls for donations from what we call our BIFF nation – the die-hard film festival fans we have had the pleasure of enjoying the power of film with for sixteen years. Each donation toward the $10,000 goal ensures the longevity of our festival.

We imagine for ourselves a thriving film festival for many years to come. It is you – our supporters and community members – that make this possible. While it will not feel the same as previous years, bumping into new and old friends on the snow-dusted sidewalks of Downtown Beloit, we will still be sharing in the power of film from the world over.

Cozy up, order in, and pick the flicks that speak to you the most. If you’re a homebody, this BIFF’s for you. Next year’s fest will be back with a vengeance: double the dancing, twice the chitter chatter, hugs for everyone, and most importantly, we will share in the magic of film.

I began my experience with BIFF nearly fourteen years ago when I signed on with the operations team as a film and audio tech. Since that time I have been involved with the festival in some way, shape or form throughout its history. When the opportunity to take on more responsibility, and to assume more of a leadership role with the festival came my way, I was both thrilled and humbled. This festival has always seemed, to me, a combination of perfection and chaos; a brilliantly conceived monster that is difficult to tame, but which is always made to cooperate by way of strong and visionary leadership.

As the Artistic Director of BIFF, I find myself in awe of the endless details, the ingredients of BIFF, that past festival directors have managed to shape into the incredible event that we all look forward to, and love, each and every year. There are a lot of things beneath the surface that are new for me, even after all this time, and I’m working hard to get familiar with them. The upside is that I am working with an incredibly talented staff, selfless board members and amazing volunteers. I am confident that the powerful and committed team we make will result in another successful festival season, and that the confidence that was placed in me will yield the same positive results we have always enjoyed. 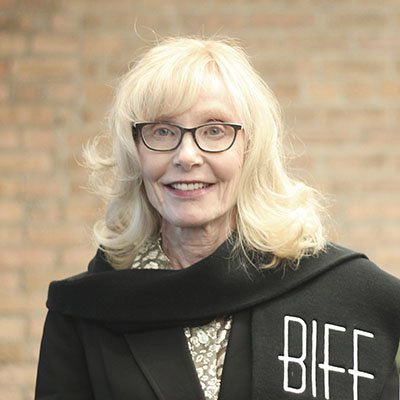 Last and certainly not least, BIFF is successful largely because of the broad community support. Over 300 volunteers each year come together to help present BIFF to the broader community and visitors to our community. We have many many individuals, couples and families who have volunteered every year since BIFF’s inception.

There are too many to name but we know who you are and we thank you for your help. BIFF would not exist if not for our volunteers.
Thank you!

The Story of BIFF

The Beloit International Film Festival was the idea of a group of people involved with business, education, the arts, and entertainment in the small college city of Beloit on the Wisconsin-Illinois Stateline. Beloit has always been a community that, as it changed, challenged itself with new ideas, changing its identity and improving life for its citizens. The Festival founders wanted to show that a small city with spirit and drive could challenge settings and established programs far larger and better endowed.

The BIFF concept was presented to the community at a series of breakfasts and luncheons as the originators sought financial support, emotional encouragement, and volunteer involvement. Local industrialists Ken and Diane Hendricks stepped forward with a challenge, offering to match up to $40,000 raised from the community. The challenge was met within weeks and, in January 2006, just six months after the concept was promulgated, the first BIFF was presented at a half dozen venues throughout Beloit’s downtown area.

It started as a long weekend designed to introduce the stateline community to the creative and cultural inspiration, challenges, and artistic rewards of cinematic art. An early principle of BIFF was to honor and celebrate ALL filmmakers in attendance and encourage audiences to recognize their work by engaging in exciting conversations. Social events went late into the night as filmmakers found a dedicated cadre of film lovers who filled their screenings and stopped them on the street, bought them lunch, and discussed their work.

One of the earliest events which has now been duplicated by a number of Festivals, was the Silent Film Showcase, presenting great films from the silent era accompanied by a new or original musical score, performed by the local symphony orchestra. The first show was sold out.

Another early project that has been honored, and continues today, is the “Kids at BIFF” program, designed to develop and educate the next generation of moviegoers. Each year, several thousand fifth graders from the region are brought to one of the large venues to watch and discuss a number of carefully selected films, presented in cooperation with the Kids First Foundation.

The first year was a widely reported success with positive reviews both locally and in national film publications. This prompted requests from surrounding communities to become settings for future films, expanding the number of venues to include settings on both sides of the state line. In 2012, with the growth in submissions and visits by as many as 180 filmmakers annually, BIFF expanded to ten days and used the additional time to celebrate the work of juried and non-juried local filmmakers representing Wisconsin and Illinois. The Wisconsin-Illinois Showdown now takes place the first weekend of BIFF and allows local filmmakers to establish relationships with other artists and to discuss their art and craft.

In 2014, in cooperation with local businesses and Beloit College, BIFF became a year-round Festival with films shown weekly, usually with filmmakers in attendance or electronically connected. During the summers, with the gift of a large inflatable outdoor screen, BIFF was able to show family films at parks throughout the area.

But the basic concepts of BIFF continue. Selected films are shown mostly in small venues, seating 30-100, most of them within walking distance of each other. The town and restaurants take on a Capraesque spirit as audiences move between venues. Large events, such as the annual BIFF Sing Along musical, the final Classic Film Showcase, presenting a great popular film selected by the community, the Silent Film Showcase, and BIFF CARES, which groups films with a social theme, continue to sell out larger venues.

In 2016, management of BIFF took on similar responsibilities for the Hollywood Film Festival creating a unique affiliation which is still in the development stage. And in 2017 the leadership of BIFF, under Executive Director Roddie Beaudoin since the start, will be assumed by Max Maiken, who has been involved with BIFF in various capacities for most of its dozen years.

Note: In 2020 Greg Gerard became BIFF Executive Director. Greg has been an integral part of BIFF since before it even began as Rod’s principal go-to guy and responsible for many key facets of it’s running.

Beloit International Film Festival Inc.
BIFF is organized exclusively for charitable purposes under section 501(c)(3) of the Internal Revenue Code, to create and stage affordable social, educational, and entertaining events. In addition, BIFF was created to harness the power of film to improve our community and ourselves.