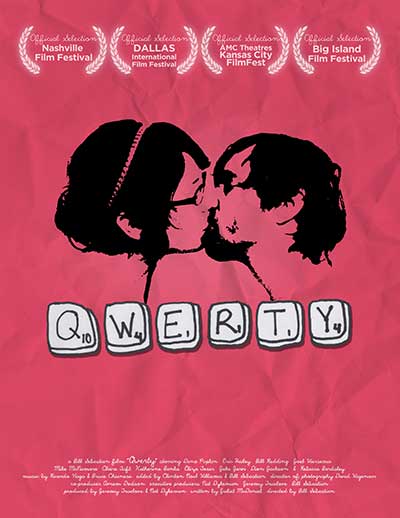 QWERTY tells the story of two lonely humans trying to figure out how to experience love.

The socially outcast, but verbally gifted Zoe, whilst not eating, drinking and dreaming Scrabble, works a lonely desk job at the Illinois Department of Motor Vehicles screening personalized license plates for hidden dirty words or messages.

Her step-father is turning 60 in five weeks, and while shopping for the event at the mall, she meets Marty, a down-on-his-luck security guard in the midst of a career-changing public meltdown over the price of underwear and the implied size of a male model’s genitalia. ‘Say it with me, you’re better than your underwear!’ he screams from atop the retail display to anyone who will listen. Perhaps wishing she could muster the courage to perform such anti-social behavior, Zoe is unwillingly drawn to Marty.

Inspired, she steps in to try to save his job with an outlandish story about life-saving heroics. The ruse fails, but when they are both permanently banned from the mall, they are stuck with nothing to do but shake hands and introduce themselves. ‘I”ll show you what your name spells,’ she says as she pulls a handy bag of Scrabble tiles from her purse – something she keeps around just in case she needs them – Marty’s full name rearranged doesn’t make much of anything, but every new, dangerous and intriguing mystery man needs a nickname, and Marty’s will be ‘Mucky’ – an appropriate one for a man mired in self-doubt and loathing. Their handshake turns into lunch, and the lunch into a date. Marty’s ‘muck’ nearly gets the best of him, but his only friend, Lewis, the friendliest sandwich-board toting religious zealot you’ll ever meet, convinces him, ‘Call her Marty, Jesus wants you to’.

As the evening transpires, its Zoe who feels the wrath of a family she only partially knows and a parental unit with the heart of an ATM. Marty, surprising even himself perhaps, shows a stronger and calmer side than he knew he had. Vowing to never return, Zoe & Marty go back to their own little world. Strengthened by the birthday ordeal, Zoe finally joins the local library Scrabble club she’s witnessed from afar and yearned to be a part of for so long. She may have known it, but now she can’t deny it – she’s good, damn good! And her new friends are not letting her get away.

This year’s National Scrabble Championship is in Chicago, and with the right preparation and concentration, Zoe could become the world’s second female National Scrabble Champion. Just when Marty was beginning to feel secure, Zoe’s life seems bent in another direction. Marty tries and tries to be happy, but he sees himself as a roadblock to her success and her happiness. The morning of the competition, Marty stays behind to wait up for Lewis, but half way through the tournament, he hasn’t shown up. Passing deftly through the first three rounds of play, about to play some of the masters of the game, Zoe is distraught with stage-fright, competitive jitters and on the verge of heartbreak without her ‘Mucky’.

Across town, on the edge of Lake Michigan, Marty faces his own demons in a showdown of nature vs. inner man. In front of an audience of 100s, television cameras and her estranged step-sister, the conclusion of the 17th Annual National Scrabble Championship appears to be as uncertain as the path of these two lovers.