Everything about ‘Distance’ started from my own experience. It’s about me, my brother and my father.

The relationship between my brother and my father has been always terrible. They never communicated and the worst part of them was that they never ever tried to understand each other. I wanted to talk about this in a slight humorous way.I highly believe that lack of communication between a father and a son is not an issue that I only experienced. Even though ‘Distance’ started off from my own personal experiment, I didn’t think this was just my own baggage. This is what happening to all of us. Because of the generation gap between parents and kids in these days, it is understandable conflicts that they would have. But, if we try to find a common issues that we can talk about with our parents constantly, I believe the relationship will get better like it was never been better.

From the start of the movie, the father and the son do not understand each others sentiments while they are watching television. The father have a hard time figuring out why his son is laughing and the son finds really weird why his father is crying for. However, at the very end of the film, they find something that interests both of them together and start to gather up better. Since mommy died in a car accident, daddy is crying all the time. And I move with ‘Wheelchair’, my wheelchair. But I can fix everything : I have a time machine. So, I will save mommy in the past and fix my legs in the future. But I need something to succeed… And I found it ! LUKAS is taught by his older brother, PETR, how to shoot a gun hidden in a shed on their farm. Unbeknown to their mother, BARA, who left PETR in charge of his little brother for the day, the boys set up a makeshift shooting range. They spend the day shooting all the cans, when one can remains, PETR instead shoots a bird on a nearby branch. PETR runs back to the house to replenish their supply of bullets, leaving the shocked LUKAS with the bird and the gun outside. In an idyllic village, the inhabitants raise hens, knead bread, tend to their crops. And guard a dark secret A short-film made as the casting piece for filmmaker Jacob R Swanson’s first feature ‘Walk Amongst the Living’. In the surreal and unsettling short, a woman (played by four different women) are terrorized by an unidentified source of light. Trapped in a dark empty room, she runs for the darkness and the light hunt her down again and again. She is temporarily freed from the chasing light, by turning on the room lights. When the light returns to torment her, she finds an unexpected way out, although only one of actress playing her gets there. Her feet on the edge of a rooftop, his hand approaches slowly… Oscar V is an Englishman living in Brazil. He is married to a Brazilian lady, but their relationship is not what it was. He runs an electronics repair shop and with his sidekick Pedro, he discovers how to manipulate web-cam software so they can view unsuspecting customers going about their daily chores.

The arrival in their shop one day of a beautiful woman with a laptop needing to be repaired leads to an encounter with the police.

Man with all the Marbles 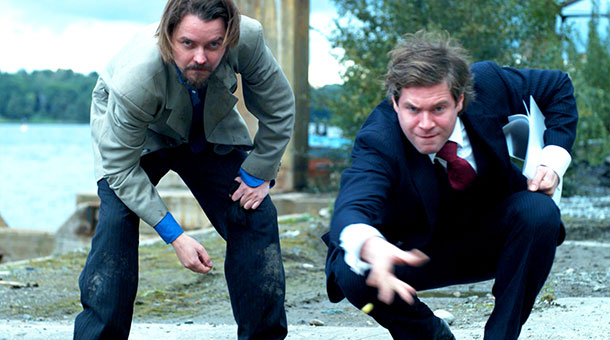 This is story of the rivalry between two brothers. Håkan is the successful one, running the family business. Martin is homeless. When their father dies, he divides the company between them. Håkan has always won over Martin in everything, from the marbles they played as children to control of the business. And Martin is fixed on the idea of beating his brother in a game of marbles. If he can just beat him, everything will turn around. He puts all his energy into practicing with his marbles. Håkan wants to buy Martins share of the business. But Martin won’t do it unless they play one more game. So they play. And the stakes are Martins shares.